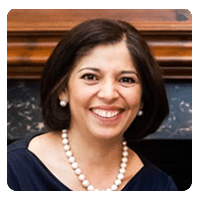 Angélica Natera is the Executive Director of Laspau. She brings over twenty years of experience working in the design, development, and management of educational programs for public and private universities, government agencies, private companies, and non-profit organizations in Latin America, Spain, and the United States.

In her previous role as Laspau’s Deputy Director, Angélica oversaw the Initiative for the Development of Academic Innovation (IDIA) as well as the organization’s administration of various scholarship programs, including the Fulbright Foreign Student Program, Science without Borders, the Organization of American States (OAS) Scholarship Programs, and national scholarship programs of Colombia, El Salvador, and Peru. Angélica joined Laspau in 2001 and led the development and launch of University Innovation (formerly IDIA) in 2006 through which Laspau has benefitted hundreds of faculty and academic leaders in the region.

Angélica earned her bachelor’s of administrative and management sciences from Universidad Tecnológica del Centro in Venezuela, a cognitive-behavioral psychology specialist at the Universidad Simón Bolivar, and a Graduate Certificate in Management from Harvard University. She received the 2010–2011 Harvard University Administrative Fellowship Award.