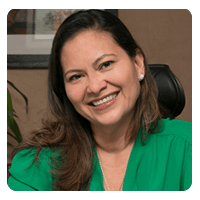 Dr. Cecilia Paredes Verduga graduated with a mechanical engineering degree in 1993; she obtained a US-AID scholarship to carry out a master’s and doctorate degrees at Rutgers University, New Jersey. In recognition of her professional achievements, years later, she received the award as a distinguished alumnus.

She was assistant dean in 2005 and until 2008 she was in charge of the Facultad de Ingeniería en Mecánica y Ciencias de la Producción (FIMCP), becoming the first female deputy dean of the same.

She was a promoter of Program 6 VLIR-ESPOL (2003-2009): management of a research program on applications of non-metallic materials.

Since 2012, she is the Academic Vice-rector of the Escuela Superior Politécnica del Litoral. She will continue to work for academic excellence, international accreditation of careers, and innovated in curricular reform, high-level teacher training, among other issues.