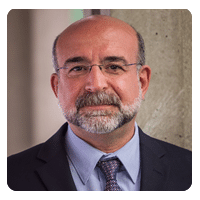 Adel has worked for several organizations like most recently the University of British Columbia (UBC) when he occupied the position of Executive Director of the International Office. He was Director General, Internationalization, at Université de Sherbrooke, in Quebec (2012-2014), and Senior Program Specialist, Information and Communication Technologies for Development, with Canada’s International Development Research Centre, based in Middle East (2004-2012). Prior to that, he directed research, innovation and technology transfer at CEFRIO (2001-2003), Videotron Communications (1998-2001), and CRIM (1995-1998).

Adel El Zaim is member of the Board of the Association of International Education Administrators (AIEA). He assumes also the chairmanship of the AIEA Awards Committee and is member of the AIEA Strategic Planning Task Force. Adel was founding member, vice-president and president of the Internet Society in Québec (ISOC-Québec) and he was member of the Civil Society Bureau for the World Summit on the Information Society (WSIS-UN) from 2003 to 2005. He served as member of the board of several organizations including Association ISOC Quebec, Collège de Maisonneuve (Montréal), Association of Arab translators and the Economic Local Development Centre, Sherbrooke Innopole, (Sherbrooke, Quebec).