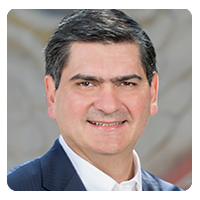 David Garza is President of Tecnológico de Monterrey (Tec), the largest private nonprofit multi-campus university system in Latin America –campuses in 29 cities across the country and more than 65,000 university-level students, as well as senior high schools with over 26,000 students. Tec stands out for entrepreneurship, innovation, internationalization, and its academic excellence.

Dr. Garza has held leadership positions at Tec for 35 years, including Tec’s Rector at a national level, Rector at the Monterrey Campus, Director of the San Luis Potosí Campus, and Dean of the School of Engineering. He has played a key role heading academic innovation initiatives at the university; most recently he led the design and implementation of the Tec21 educational model in Tec´s 26 campuses and six schools.

In his role as President he also supervises Tecmilenio University with 33 campuses and close to 60,000 students, as well as TecSalud, a health system with two academic medical centers and more than 75,000 patients encounters annually.

He is a past Chairman of the Global Engineering Deans Council; a member of the Steering Committee of APRU, the President’s Council of University of the People, and the advisory councils of The Edison Alliance at the World Economic Forum and Citibanamex. He is a member of professional societies and organizations such as ASEE, IEEE, ACM, Sigma Xi, and Phi Kappa Phi.

Dr. Garza has served in conference committees and national and international councils in industry and academic organizations. He has been a speaker at events in over 20 countries. He is the author of multiple articles and has worked as a consultant on a variety of business projects.