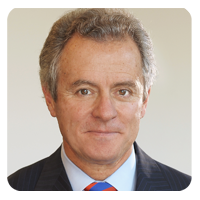 Federico Valdés Lafontaine is an Civil Industrial Engineer from the University of Chile and a Master of Science in Management from Stanford University.

In 2016 he began his second term as Rector of the University of Development, since August 2011. Previously, he had served as Vicerrector in Economic and Pro Rector.

Valdés is one of the founders of the University of Development, born in Concepción in the early 1990s with only 100 students and 9 years later began academic activities in Santiago with a total of 1,500 students.

Today, the institution has 14 thousand students and 15 thousand graduates, in its 24 undergraduate courses that include, among others, Medicine, Engineering, Business, Law, Psychology, Architecture and Design. Currently, the university has two headquarters in two cities, four campuses and two clinics. In its postgraduate, the university has more than 2,500 students, concentrating especially in its Faculties of Government, Education, Business and Sciences of the Health.

During its management, the UDD achieved the third institutional accreditation in 5 years, including for the first time the Research area and is one of the 40 best universities in Latin America according to the Times Higher Education Ranking, thanks to its achievements in this area entrepreneurship, innovation and public responsibility.