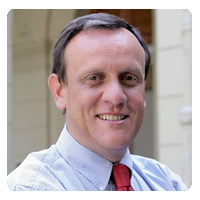 Ignacio Sánchez is Associate Professor at the Faculty of Medicine of the Pontificia Universidad Católica de Chile (UC). He completed his medical studies at UC and then majored in Pediatrics at the same institution. He completed a Pediatric Respiratory Disease Subspecialty Program at the University of Manitoba, Winnipeg, Canada.

He was appointed President of the Pontificia Universidad Católica de Chile in March 2010, succeeding Dr. Pedro Pablo Rosso. In 2015, he was confirmed for a second term, and on March 5, 2020, he assumed his third five-year term as President.

His academic and research work has been focused mainly on the study of cystic fibrosis, asthma, and lung function in children. He has published the book “Clinical Approach to Child Respiratory Diseases” in two editions and several hundred scientific articles in international and national journals. He is also co-editor of the book “Pediatría de Meneghello,” the primary publication in the area of ​​Spanish-speaking pediatrics.

He has published a series of books on Higher Education issues and numerous reflection articles on challenges in specialized magazines in Chile and abroad in recent years. He is a permanent guest to speak at the most important forums on Higher Education.

He presides over the Chilean Chapter of Catholic Universities. He is part of the Executive Committee of the Council of Rectors of Chilean Universities-CRUCH-, currently being its alternate vice president.

In the past, he chaired the Network of Non-State Public Universities (G9). At the international level, he is Vice President for the Southern Cone Region of Oducal. He is a member of the Executive Committee at the Universitas 21 network and the International Federation of Catholic Universities (FIUC).

He is married to Salesa Barja, Associate Professor at the UC School of Medicine, a doctor, Master, and specialist in Pediatric Nutrition. He has a family of 7 children and four grandchildren.