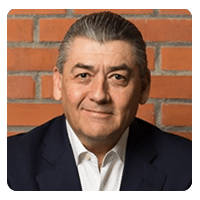 President Board of Directors, FEMSA Governing Board, Tecnológico de Monterrey

After 11 years of professional experience in different companies, José Antonio Fernández Carbajal began his career, in 1988, at FEMSA serving various positions in its different businesses, including CEO of OXXO.

In 2010, he was appointed Vice-President of Heineken Holding NV’s Board of Directors and Chairman of Heineken’s Americas Committee, which oversees the strategic direction of business in the Americas and evaluates new business opportunities in the region.

Since 2012, Mr. Fernández is also Chairman of the Board of Tecnológico de Monterrey, where he served as Vice Chairman since 1997.

In 2017, he was elected as a full-term member of Massachusetts Institute of Technology (MIT) Corporation, where he contributes in the Dean for Student Life and Dean for Undergraduate Education committees. Currently, he also participates as a board member of Industrias Peñoles.

He holds a degree in Industrial Engineering and Systems from Tecnológico de Monterrey and in 1978, he earned an MBA from that institution. For more than 20 years, he has been professor at the institution.