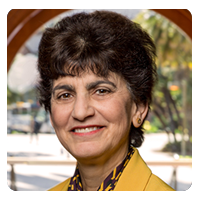 Papazian most recently served as president of Southern Connecticut State University (SCSU) in New Haven, Connecticut. There, she demonstrated a singular focus on student success, establishing a task force in her first year as president to review practices and develop recommendations for change.

Previously, Papazian was the provost and senior vice president for Academic Affairs at Lehman College of The City University of New York, managing a $70 million budget that supported 450 full-time faculty members and 200 staff members, creating a research advisory board, hiring a new director of the Office of Research and Sponsored Programs, and developing a research handbook for faculty.